Lunch and Learn with Daniel Sokatch

Join us for a lunch and learn on Zoom with Daniel Sokatch as he discusses his book Can We Talk About Israel?.

From the expert who understands both sides of one of the world’s most complex, controversial topics, a modern-day Guide for the Perplexed-a primer on Israel and the Israeli-Palestinian conflict. 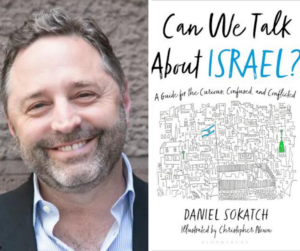 “Can’t you just explain the Israel situation to me? In, like, 10 minutes or less?” This is the question Daniel Sokatch is used to answering on an almost daily basis as the head of the New Israel Fund, an organization dedicated to equality and democracy for all Israelis, not just Jews, Sokatch is supremely well-versed on the Israeli conflict.

Can We Talk About Israel? is the story of that conflict, and of why so many people feel so strongly about it without actually understanding it very well at all. It is an attempt to grapple with a century-long struggle between two peoples that both perceive themselves as (and indeed are) victims. And it’s an attempt to explain why Israel (and the Israeli-Palestinian conflict) inspires such extreme feelings-why it seems like Israel is the answer to “what is wrong with the world” for half the people in it, and “what is right with the world” for the other half. As Sokatch asks, is there any other topic about which so many intelligent, educated and sophisticated people express such strongly and passionately held convictions, and about which they actually know so little?

Complete with engaging illustrations by Christopher Noxon, Can We Talk About Israel? is an easy-to-read yet penetrating and original look at the history and basic contours of one of the most complicated conflicts in the world.

Daniel Sokatch has served as the CEO of the New Israel Fund since 2009. During the past decade of extraordinary challenges, NIF has risen to new heights as the great defender of justice, democracy and equality in Israel.

Before joining NIF, Daniel served as the Executive Director of the Jewish Community Federation of San Francisco, the Peninsula, Marin and Sonoma Counties. Prior to his tenure at the Federation, he was founding Executive Director of the Progressive Jewish Alliance (now Bend the Arc). In recognition of his leadership, Daniel has been named four times to the Forward newspaper’s “Forward 50,” an annual list of the fifty leading Jewish decision-makers and opinion-shapers. He has contributed articles to leading newspapers and magazines, including The New York Times, Washington Post, the Forward and Haaretz, and is the author of forthcoming book, Can We Talk About Israel: A Guide for the Curious, Confused, and Conflicted (Bloomsbury, Fall 2021). Daniel holds an MA from the Fletcher School at Tufts University, a JD from Boston College Law School, and a BA from Brandeis University. He is married, is father to two daughters, and resides in San Francisco.