Please Join us On March 27 for Survivors Club 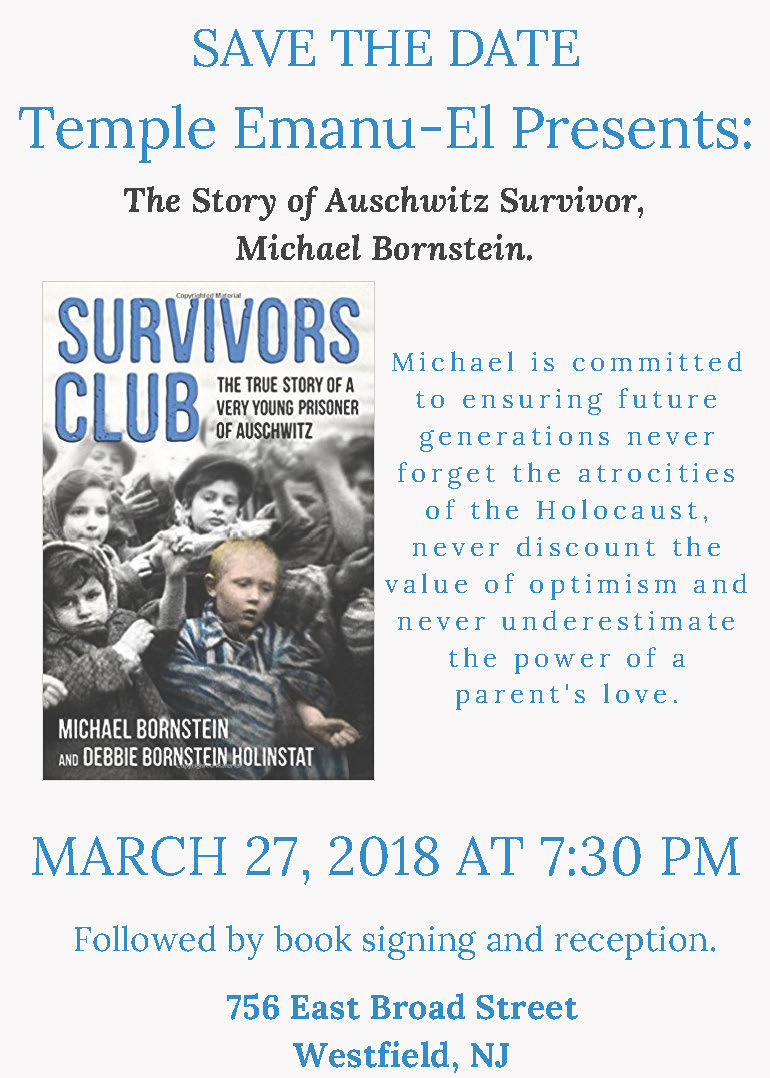 For seventy years, Holocaust survivor Michael Bornstein chose to stay silent about his story. He wasn’t sure what he remembered and some parts were too painful to discuss. Then he discovered a document from a museum in Israel that revealed a stunning detail about his survival. That began a journey by Michael and his daughter, Debbie Bornstein Holinstat, a broadcast news producer, to learn more. It culminated with the father-daughter team writing Survivor’s Club – an accessible, inspirational, and important Holocaust memoir and NY Times bestseller.

Now, armed with new information about his survival, and against a backdrop of rising anti-Semitism and racism worldwide, Michael and Debbie are eager to share what they’ve learned. They have appeared on TV, radio and at speaking engagements nationwide, reminding listeners of what can happen when discrimination is ignored.

We are pleased to announce that Michael and Debbie will be speaking at Temple Emanu-El on March 27th, 2018 at 7:30 PM, followed by a book signing and reception. They are excited to return to the town where the Bornstein family lived for many years. The Westfield and surrounding communities are invited to attend this very special Holocaust remembrance event. Michael can no longer stay silent. He is committed to ensuring that future generations never forget the atrocities of the Holocaust, never discount the value of optimism, and never underestimate the power of a parent’s love.

If you are interested in reading the book, you can purchase it from Amazon here.

We encourage you to read the book ahead of time and bring your book to the event to have it signed by Michael.  You will also have the option of purchasing the book at the event.

Each week, we’ll bring you a new story or fact about the Holocaust you may not have heard before. We hope that you find these stories useful and memorable in your own journey.

“It is impossible to put into words what we  have been through. What happened exceeded   our boldest dreams. The Germans fled twice   from the ghetto… My life’s dream has come true. Defense in the ghetto has become a fact.   Armed Jewish resistance and revenge are   actually happening. I have witnessed the   glorious and heroic combat of the Jewish   fighters.”

MordechaiAnielewicz was the leader of the Jewish Fighting Organization, which led the Warsaw Ghetto Uprising; the largest Jewish insurrection during the Second World War, which inspired further rebellions in both ghettos and extermination camps.

As we prepare for the celebration of Hanukkah, we recall the fight of the Macabees, the resistance of the Jewish fighters against the powerful armies of Antiochus, in pursuit of our freedom to worship and live as our true and authentic Jewish selves.

Did you know that today there are more than 114,000 children in the U.S foster care system that are available for adoption? These children entered foster care through no fault of their own, as victims of child abuse, neglect or abandonment and their parents’ legal rights have been terminated.

This past Sunday, our religious school 6th graders and their families had the opportunity during our recent Nisayon event to learn the story of adoption through the eyes of Paulette Dorflaufer. Paulette remembers being hidden in an ophanage in her native France during the Holocaust. She also remembers her amazement on traveling to the US to meet Harry and Ruth Wolfe of South Orage, who had adopted her. She and a chaperone traveled on the Queen Elizabeth to meet her new parents in America. She remembers arriving at her new home in South Orage, where she had her own bedroom.

To hear more about Paulette’s story, read this article from the New Jersey Jewish News.

Today, November 9, marks the 79th anniversary of an event known as Kristallnacht, the “Night of Broken Glass”. It was a wave of violent anti-Jewish attacks that resulted in shattered glass from Jewish-owned homes, synagogues, and businesses lining the streets of Germany.

Why is Kristallnacht so important?

Kristallnacht represents a rapid escalation of the Nazi racial policies, and from that point on, the violence against Jews intensified to what we know as the Holocaust. The lesson of Kristallnacht underlines the necessity to raise awareness of this kind of behavior. It is important to speak up and question policies that discriminate.