The Last Interview with Eshkol Nevo 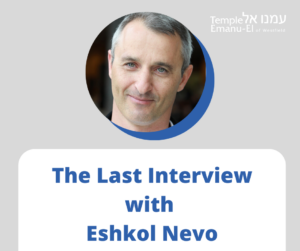 We are so thrilled to have a conversation with Eshkol Nevo one of Israel’s most successful writers. Join us as we discuss his newest book, The Last Interview, and learn about his inspiration and the writing scene in Israel.

Click here to purchase his book The Last Interview.

Eshkol Nevo was born in 1971 in Jerusalem. He is one of Israel’s most critically and commercially acclaimed writers and also co-runs the biggest creative writing school in that country. All of his books have been bestsellers in Israel, and his work has been translated into a dozen languages. His novels have sold over a million copies globally and won or been nominated for several literary prizes.