Mazal tov to our Weill Award winner of 2020: Maia Zaborowski! 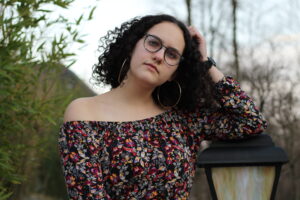 On Science and Faith

Nine-forty five in the morning on a rainy Wednesday.

I’m sitting in my Anatomy and Physiology classroom, typing methodically as my teacher lists vocabulary on the board, the dry erase marker tapping rhythmically with every new line. I pay close attention to the lesson on neuron activity, taking note to copy the intricate diagrams from my textbook. As my teacher takes a moment to walk around the room and answer questions, I stare at the complex illustrations on the page in front of me and marvel at the feats our bodies can perform. A single cell, less than a tenth of a millimeter in diameter, can carry out countless functions simultaneously, receiving signals and creating proteins and replicating DNA. These processes occur constantly in our cells, of which the human body has more than there are galaxies in the observable universe. Thinking about the wonders our bodies can execute, it’s difficult not to ask myself whether there isn’t some higher power, an entity that allows us to do the things we do every day.

I’ve always known I was Jewish. How could I not? Judaism surrounded me from day one: Israeli parents, a Hebrew name, reciting prayers every Friday around the dinner table before I could even fully understand the English language. I knew the importance of a Jewish community from a very young age, and I was taught by my parents to develop my own relationship with the idea of God, regardless of what people told me. No matter what happened in my life, I never forgot that lesson.

As I grew into a child with a smidgen more wisdom, I began to question the world around me. How did the sun rise and fall each day? Why do humans wear clothes when other species don’t have to? How do we know which way is up and which is down? Now, my father is a chemical physicist and my mother is an industrial engineer by trade, and as a consequence, I have always had answers to my questions about the world readily available to me. But the older I grew, the more the world confused me. Why do bad things happen to good people? Why are some people born into wealth and ease and others are doomed to a lifetime of struggle?

These questions are not designed to be answered, not by science nor by religion, but both offer something else – a way to deal with the unanswerable. Hundreds of years of evolution have made us curious creatures, staring in wonder at the stars until we figured out a way to get up there ourselves. In this way, science gives us the opportunities to attempt to answer our own questions. Religion approaches life’s unexplainable queries by attempting to find not an answer, but a reason for asking. The Torah tells me to turn to God and pray when I am faced with difficult questions, but not to pray for answers for myself. Instead, I am told to look inward and ask what I may do for the good of others. By finding joy in life and through tikkun olam, repairing the world through my actions, I may find that many of those burning questions are meant to be asked and not answered.

Tikkun olam is, in fact, one of the fundamental Jewish values upon which I lay my moral foundation. My knowledge of the natural world tells me that this planet needs saving, and nobody is left to do it but those of us who wish to see the planet saved. Truly, environmentalism and Judaism can never be untangled from one another. My love for the Earth I live in, which provides me with every resource I require for life, cannot be separated from my love for the wondrous world that God has given us, with all of its love and confusion and messiness. Why should I not want to protect both with my powers of scientific knowledge and spiritualism? My religious conscience tells me that tikkun olam is the best way to strengthen my relationship with God, while my scientific conscience tells me that repairing the world today will make for a better tomorrow for me and this planet.

In this way, science and religion are not contrasting, or even remotely conflicting concepts. Rather, they are two sides of the same coin, two manifestations of the same truth. It is said that science is “God’s language,” and this statement is infallible. Science and the knowledge of the natural world is not a rejection of the Torah’s teachings; in fact, the Bible states that this knowledge is simply another means of knowing God. The Jewish tradition explains how to act in the world which we understand and can describe using science. I know, as my ancestors did before me, that the understanding of our Earth will only bring me closer to God and to my Jewish faith.

My name is Bari Weiss.

I am not a Jew because people hate my religion, my people, and my civilization.

Not for a single moment does Jew-hatred, like the kind we are seeing in this city, make me a Jew.

I am a Jew because of the audacity and the iconoclasm of Abraham, the first Jew of all. The whole world was awash in idols and he stood alone to proclaim the truth: There is one God.

I am a Jew because our God commands us to never oppress the stranger.

I am Jew because Ruth, the first convert to Judaism, told her mother-in-law Naomi, “your people will be my people and your god will be my god,” reminding us of the centrality of the Jewish people to Judaism.

I am a Jew because of Queen Esther, who understood that she had attained her royal position in order to save her people from destruction.

I am a Jew because the Maccabees were the original resistance. Because they modeled for us — and for all peoples — how to resist the temptation of self-erasure.

I am a Jew because when Rabbi Akiva was being tortured to death by the Romans he laughed. He laughed and he told his students that he could finally fulfill the commandment to love God with all of his being.

I am a Jew because even after the heart of Judaism and Jewish sovereignty were destroyed my people refused to accept the logic of history and disappear. And I am a Jew because some of our greatest renewals took place in exile.

I am a Jew because my people has been targeted and despised and murdered by the Nazis and Soviets.

I am a Jew because evil hates my people.

I am a Jew because because my people managed to turn destruction into redemption by returning to their land after 2,000 years.

I am a Jew because our Founders saw themselves as new Israelites.

I am a Jew because the biblical words on the liberty bell — proclaim liberty throughout the land! — rang out from the righteous mouths of this country’s abolitionists as they fought for universal freedom in this New Jerusalem.

I am a Jew because it was Emma Lazarus who etched the biblical injunction to welcome the stranger onto the consciousness of America when she wrote the words: “Give me your tired, your poor, Your huddled masses yearning to breathe free.”

I am a Jew because of students across this country who refuse to be smeared and denigrated because of who they are, who are standing up against humiliation, pressure and abuse to affirm the justness of Zionism.

I am a Jew because I refuse to stay silent in the face of injustice. I am a Jew because I have no patience for leaders who speak boldly while failing to take the actions necessary to protect our community. Or for partisan hacks that claim anti-Semitism is the exclusive domain of their political opponents. Or for leaders who believe they can fight Jew-hatred while making political alliances with anti-Semites.

I am a Jew because I refuse to lie.

I am a Jew because Jews do not cause Jew hatred. Ever.

Today, as in so many times in history, there are many forces in the world insisting that Jews must disappear or die. Some say it bluntly. Some cloak it in the language of progress.

But I am a Jew because of I know that there is force far greater than that. And that is the force of who we are and the force of our world-changing ideas.

We are the people whose God never slumbers or sleeps, and so neither can we.

We are the ever-dying people that refuses to die.

The people of Israel lives now and forever.

I just returned home from spending a month as a participant in URJ Urban Mitzvah Corps, a social justice program. We lived in a sorority house on the College Avenue campus at Rutgers University. UMC has formed close relationships with local organizations in the New Brunswick community through volunteer work. All of the participants were able to choose two 2-week worksites in areas of focus such as engaging in food and economic justice, at-risk youth, and the elderly. Our evening programs were focused on strengthening the community and learning about core Jewish values, with both social and educational programs.

I started off the summer working at PlaySAFE, a fully subsidized camp in New Brunswick for underprivileged children. I worked at Buccleuch Park and played sports all day with the kids. At the camp, I volunteered as a counselor and was able to see firsthand the struggles in our community. It warmed my heart to put a smile on these kids’ faces and I enjoyed every minute with them. I played lots of games with them, made sure they were quiet when they needed to be, and mediated arguments between them. While playing sports, pushing them on the swing, or just talking with them, I was able to form connections that included them giving me nicknames, running through the sprinkler, and creating art together.

Overall, this was the most impactful and amazing summer of my life. I created lifelong friendships and bonds with the other participants and with the people I encountered at my two job sites. I learned valuable lessons of independence, responsibility, and work ethic while helping others and while having people there to support me when I needed it.

YLE is Planting Seeds in Israel 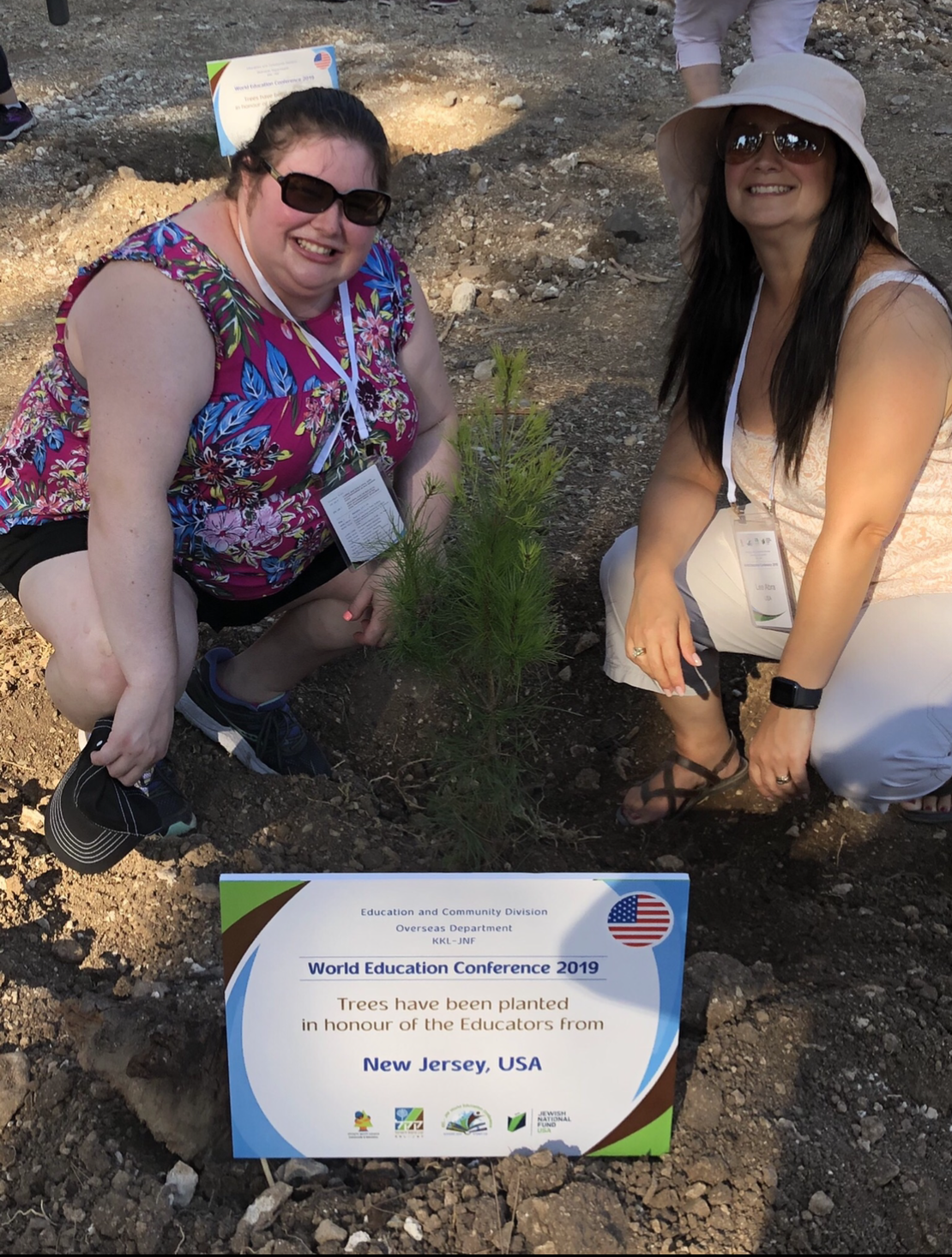 Coming to Israel has always been a warm and spiritual experience for me. With each return to the Holy Land, a new connection can be discovered. Through the JNF KKL Educators Mission, we again have had the opportunity to connect. This time, it is through the eyes of an educator. We are here with others who are also here to share their passion for Jewish education and together we are learning new ways to bring Israel education into our communities.

Teaching Jewishly is all about planting seeds – seeds of knowledge that is. We give our students a taste of so many different ways to be Jewish and hope that they are inspired to let those seeds grow within their hearts. Less metaphorically, we went to the Lavi Forest and planted seedlings. With the same care we have for our children, we carefully created a home with a strong foundation, stabilized it for optimal growing, gave it room to breathe, nourished it with water and stepped back to watch it grow.
–  Samantha Eichert
Samantha Eichert is the new Assistant Director of Youth Learning and Engagement.
August 23, 2018

Temple Emanu-El’s Task Force for Diversity and Inclusion is proud to have been accepted into the Kehillah Shlemah – Synagogue Inclusion Project (SIP)! We are thrilled to be joining a cohort of 8 congregations who will be learning together over the year ahead, working toward creating a more inclusive congregational community.