In an effort to curb the continuously dropping levels of Holocaust education and awareness across the United States, we invite Temple Emanu-El and the community to join us for The Cattle Car Experience: a 360 degree exhibit within a replica WWII cattle car. 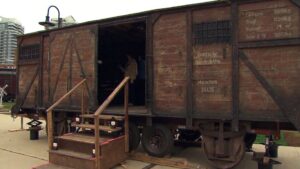 The Cattle Car: Stepping In and Out of Darkness is an interactive, immersive and multimedia experience inside of an exact replica of a World War II cattle car that was used to transport Jews and other targeted groups to the concentration camps and extermination camps. During this experience, you’ll be able to emotionally connect to the displays as well as the experience through being immersed in this historical space.

The Cattle Car will be in the Temple Emanu-El parking lot on Wednesday, December 7 from 12:00 – 8:00 PM. Space is limited – registration required. The suggested audience is for ages 13+. All of our temple Emanu-El 6 – 7 grades will experience the exhibit during Nisayon hours.

Thank you to the Rose Kafar Rose Holocaust Education Legacy Fund for allowing us the opportunity to bring this experience to our community.

Temple Emanu-El is proud to partner and bring the Cattle Car Experience to the Westfield High School.

As you stand in a ShadowLight cattle car–an exact replica of the one used during World War II–you are immediately transported back in time as men, women and children begin to file in with their baggage. They are crammed in, and there is only standing room. Posters of intimidation hang on the walls and the helpless victims fear the unknown. Soon after, the sight of SS officers seizes their hope, forcing them to reluctantly surrender their human rights. Empathize with the victims on their journey, and consider the freedom and power that you have today to resist the present reality of discrimination and hatred.

Let’s Create the Future that We Deserve!

The Holocaust was one of the worst demonstrations of hatred. This historical tragedy involved the state-sponsored murder of six million Jews by Nazi Germany and its co-conspirators. Although we are decades past this event, the Holocaust is still relevant today as it serves as an example of how dangerous discrimination and dehumanization can be. If we stop talking about it, we may lose sight of the fragility of civilization.